The following concerns special stuff, rather unusual I think, I have done about the FingerChip and fingerprints.

My very first "thinked" image about the FingerChip was the following. I needed to show:

Here is the result, shot with the brand new digital camera of the company end of 1998, at my desk above one of my book. 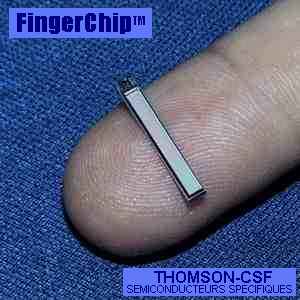 When the FingerChip project started, one of the most difficult thing was to show a sweep movement and how it was working when writing articles for the press. It is easy to show when you are facing a customer with the device, but on a piece of paper, well, it's more complicated. The same problem quickly came when I started the first release of the FingerChip website: we needed a kind of movie to explain what it is. So I created two animated gifs, with small pieces of image and a lot of patience.

The first animated gif was simply showing what is happening when you are sweeping your finger above the sensor (created beginning 1999).

The second one is more complicated: it shows the full enrollment and authentication sequence, with the storage in a smart card. Two version exists, as the first was with Thomson-CSF, and the second with Atmel, but they are exactly the same.

I have been copied...

Pinewave and see teachnology (with the typo): they cheated my creation, replaced with another sensor (Authentec) but kept the FingerChip images (which are better by the way)... 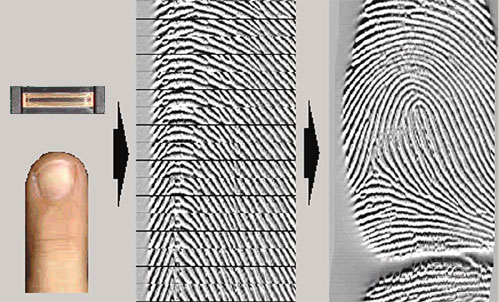 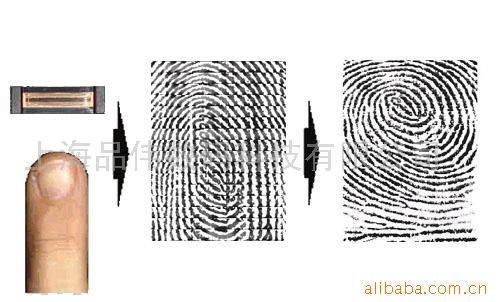 I created the following image in 2000, using a (free) software called Terragen. I started from my fingerprint image, used as a map. BTW, about copyright, that's easy for me to prove that this image is from me, as it is my fingerprint... 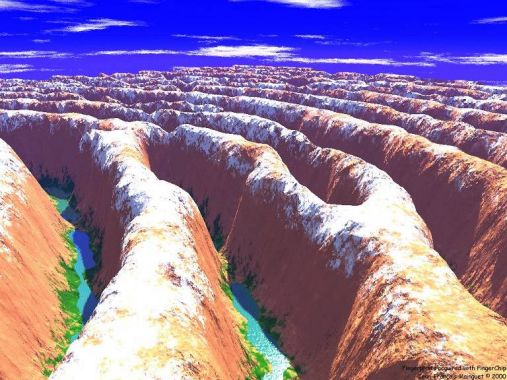 But Terragen is also able to compute successive images with a camera travelling in the virtual world created from the map. So do I, making a movie where you travel in the valleys of my fingerprint. It took two PC's during several days to compute all the images (in 2000, PCs were not as fast as today...).

The movie starts where the blue arrow is. The original movie was 48 megabytes for 40 seconds, because I didn't use any compression scheme to make sure to keep the resolution.
Click on the image to download the movie. 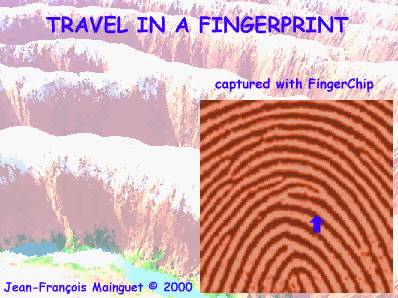 (2006 Apr) I discover the following image, which is a 3D image, using Scanning Kelvin Probe technology, showing a fingerprint left by sweat on a metal surface. University of Wales Swansea 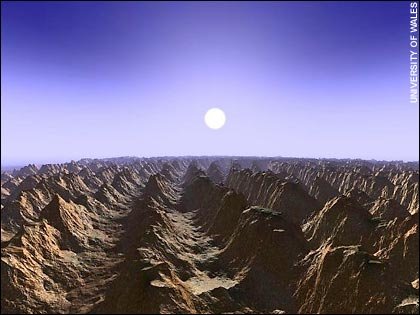